Clickworker Banned Accounts of Those Who Used Fake Language Certificates 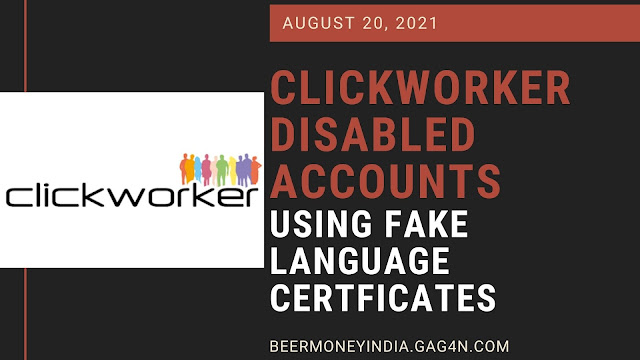 These days there is an increase among workers who work on UHRS through Clickworker to add fake language certificates to gain access to the foreign language hitapps on their UHRS marketplace.

The UHRS judges who involved themselves in these malpractice are now facing the hammer against their deeds. Many such users who used different methods to add fake language certificates were detected by Clickworker, Consequently their Clickworker accounts being suspended.

In an official email from Clickworker, to such an user who used fake language certificates, they clearly stated that the account was banned due the fake information the user had provided regarding his language skills.

Doing such activity was a violation of paragraph 2.2 of Clickworker’s Terms And Conditions. Following which allows Clickworker the right to terminate the account along with rejection to pay any earnings which the user had in his CW account.

Once Clickworker verifies the language proficiency, the account will be reactivated and the remaining amounts will be paid.

How to Prevent Yourself from Not Getting your Clickworker ID Banned

Many new users who aren’t aware of Clickworker Terms often do mistakes that leads to their account suspension. Here are some tips if you don’t want your Clickworker account to be deactivated

Users should keep in mind that Clickworker has strict policies regarding the number of workers in a household that implies for an specific internet connection. Although Clickworker states that there can be 2-3 accounts from a household ( IP Address / Internet Connection). But to be on the safe side we recommend having 1 Clickworker account per IP address.

Most users commit mistake by sharing their Internet connection with other co-workers on Clickworker. You can share your internet with other for any cause except they want to open their Clickworker account and logging into it.

Same applies for you to never use a Public Internet Connection to login into your CW account while using another internet connection which isn’t yours.

Using Fake Information to earn more money is an explict example of getting banned from Clickworker. The above case falls under the same category.

You Shouldn’t use a VPN / proxy to access Clickworker once you do so your account will be immediately banned. Using a VPN gives an indication that you are trying to conceal your original location of residence.

If you are thinking to create another account on Clickworker using fake information or any other methods don’t do that as you will banned as Clickworker has robust algorithm to detect these kinds of malpractices.

Clickworker Banned Accounts of Those Who Used Fake Language Certificates

How to Earn Money by Working on Oneforma

Tips on How to Work on UHRS and boost your earnings

We will be happy to hear your thoughts